It may seem a nonsense: Tuscany is acclaimed for its wines, the Val d’Orcia area counts some of the kings of the Italian wine production, such as the Brunello di Montalcino, the Nobile di Montepulciano and the Orcia DOC, and we feel like writing about beers…crazy Authors, you may think. Nevertheless, since Tuscan wines are so renowned and so many websites, blogs and magazines have been describing and reviewing these excellent products much more extensively and competently, and that one of this blog’s aims is bringing to life uncommon and less known aspects of our territory, the idea that in Val d’Orcia, besides wine, you can also find home-brewed beers fascinated us, and during our recent itinerary in this area, we discovered the San Quirico Brewery in  San Quirico d’Orcia (http://www.birrificiosanquirico.it/index.php) 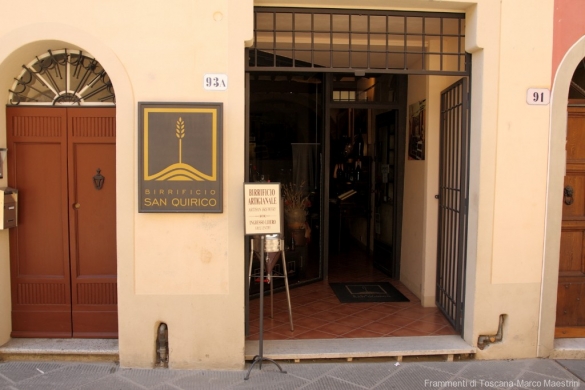 The brewery is located in an ancient building overlooking the main street in San Quirico d’Orcia, where the majority of stores, restaurants, and monuments, in addition to the Gardens “Horti Leonini” and “Rose Garden”, are situated. The palace hosted in the past the pilgrims in transit through the Via Francigena that decided to rest in San Quirico d’Orcia during their travel to or back from Rome. The beers are home-brewed and produced without preservatives, artificial flavourings or chemical additives, making use of local raw materials (wheat from the Val d’Orcia – one of the best in Italy – and water from the near Mount Amiata), and when imported, as in the case of malt and hops, materials are accurately selected in order to guarantee their quality. 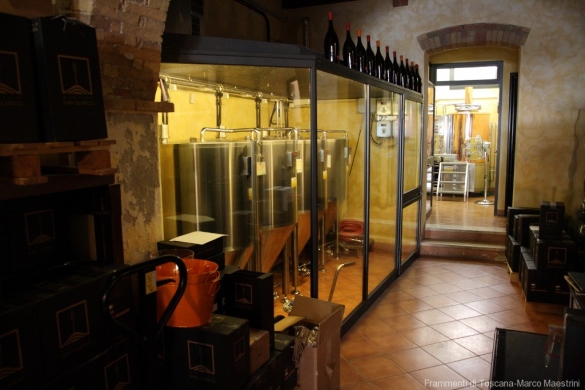 Two are the beers produced: the one called “Iris”, golden blonde in colour, fresh and fruity, and the “Giulitta”,  our favourite, amber in colour, with a creamy and dense head, persistent and deep flavour. We tasted both beers (1€ per glass), tapped directly on the place of production, sat at the counter admiring the beautiful building of the brewery, that also produces original e delicious beer jellies: made from one of the two beers, some are also flavoured with spices and other peculiar ingredients, like ginger or cinnamon. Some days after our visit we tasted the bottle of “Giulitta” and the ginger-flavoured beer jelly we had purchased with some pecorino cheese, and the combination was spectacular!

So, if you are spending some of your leisure time in the splendid Val d’Orcia, after enjoying its extraordinary landscape, its isolated cypress trees and smooth hills,  its winding roads and extraordinary wine, why don’t you also discover these delicious home-brewed beers, having within themselves all the excellence of this wonderful land?  The icing on a fantastic cake!

Disclaimer: This is a personal blog and the Authors receive no compensation for any of their product/commercial activity reviews, that represent their personal and transparent opinion.