The lovely hamlets of the Val d’Orcia

An itinerary to enjoy one of the most beloved parts of Tuscany, and admire its picturesque landscape that offers enchanting sites and picture postcard views all the year round: Spring with its intense green, Summer with long daylight hours and golden yellow fields, Autumn with its warm colours, and Winter with its blanket of calm and silence. Every season of the year is right to explore the Val d’Orcia.

The Val d’Orcia: who doesn’t know or has ever heard of it? The images of its landscape, with smooth hills, cypress trees that line its winding roads, lovely farmhouses and hilltop hamlets correspond, in the mind of many people, to the image of Tuscany itself, and media have always contributed to this with pictures of the area dominating the cover pages of many magazines devoted to our Toscana. 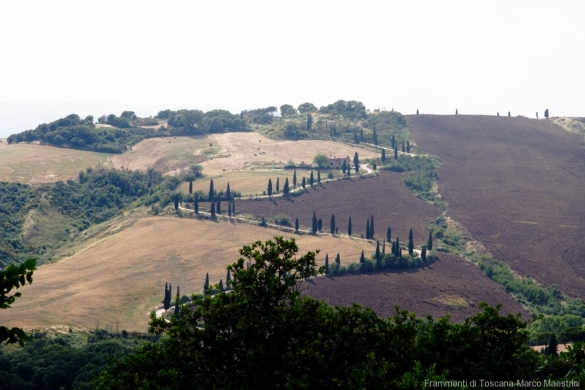 The Val d’Orcia is a valley in Southern Tuscany bordered to the North by the hills of Siena, and to the South by the imposing profile of the Mount Amiata, an extinct volcano. In the Middle Ages, the pilgrimage route Francigena from Canterbury to Rome crossed this territory and dotted the area with small villages, inns and abbeys where the pilgrims could rest and receive assistance. We did this itinerary some days ago and wonderful was the impression of feeling as tourists just a few kilometres from home. The ones of you who have time to spend in this vicinity can do it in several days or reverse it, according to the place of departure, and those who live not so far away from the area can also break it in several small trips.  Here are our stages:

We started our trip from Montalcino, the homeland of one of the kings of Italian and Tuscan wines: the Brunello, of course! The hamlet is easy to reach from Siena if you drive on the SS2 (national road n.2, called “Cassia”) and then on the SP45 that you have to take a couple of kilometres after the town of Buonconvento. Once in Montalcino we went to the Fortress, the last defence of the Sienese Republic against the Florentine conquest, that hosts today an important wine shop and offers a very beautiful view over the whole Val d’Orcia; the characteristic streets and alleys of the centre count many stores, restaurants, wine bars and cafés, and the Palazzo dei Priori, with its long and narrow tower, overlooks the main square, Piazza del Popolo, where a valuable gothic loggia can be admired. 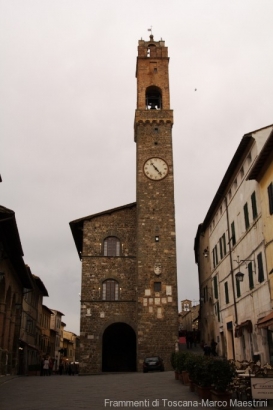 We left Montalcino again on the SP 45 and got on the SS2 toward San Quirico d’Orcia. I find this hamlet particularly lovely because of its equilibrium: it’s neither too big nor tiny, neither too touristic nor isolated. On its main gracious street there are very beautiful churches (in particular, the Collegiata), palaces, nice stores, cafés and restaurants. We made a stop at the Horti Leonini, a Renaissance garden harmonically designed and well maintained, and the Rose Garden. Both gardens’ entrances are on the main street and well marked. 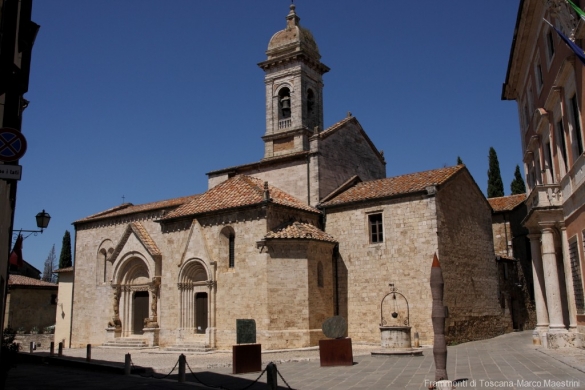 We continued on the SS2 and got to Bagno Vignoni, a tiny medieval village only a few kilometres away from San Quirico, and characterized, by a very big basin (about 50 by 30 metres) of thermal water in the centre of the hamlet: houses, palaces, inns and restaurants were all constructed around the basin, that occupies the same position and function that in the Italian villages normally belong to the central square.  I warmly recommend to visit this hamlet in Autumn or Winter, when the steam evaporating from water, well visible due the lower external temperature, creates a magic, charming and unique atmosphere. If you are interested in thermal services, you can follow this link. 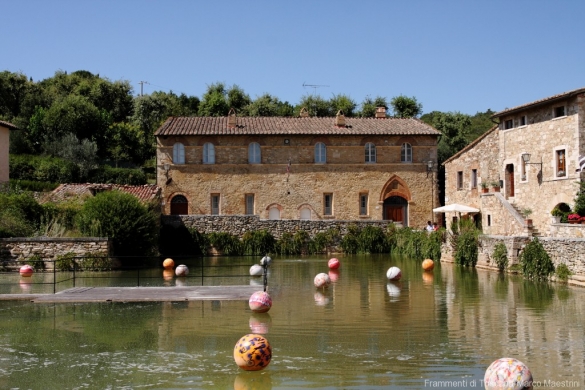 
We continued on the SS2 and got to Castiglione d’Orcia, a quiet village with nice little streets and an uncommon sloping central square with its original pebble paving, dedicated to Lorenzo di Pietro, the painter and sculptor of the Sienese school called “Il Vecchietta”, that was born in the hamlet. A few kilometres from Castiglione, Rocca d’Orcia is dominated by the imposing Citadel “Rocca a Tentennano”, overlooking the whole Val d’Orcia. We parked outside the hamlet and walked up into the village; we should have continued going up to reach the citadel, but the day was really too hot, thus we decided to postpone the climb to a fresher season, to enjoy the view from up there: it must be amazing! 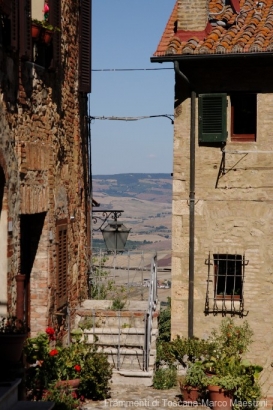 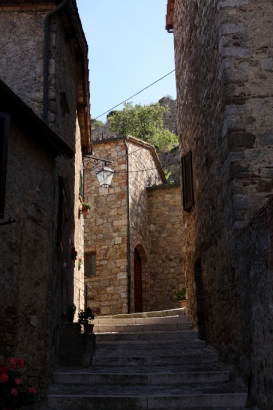 We came back towards San Quirico on the SS2 and then took the SS146 to Pienza, the city of Pope Pius II Piccolomini, that was designed according to the humanistic vision of the ideal city, in opposition to the unplanned towns rose during the Middle Ages. Also called as the “utopian city”, it represented one of the first urban planning efforts, and determined a significant role in the further urban developments in Italy and abroad. The application of this vision in the construction of Pienza, in particular to the buildings around the central square, is considered a major masterpiece of the creative human genius. Besides architecture and urban planning, Pienza is famous for its evocative views and the delicious “Pecorino” cheese, sold in many stores of the centre.

Only a few kilometres from Pienza is Monticchiello, a lovely hilltop village that is also called “the terrace of the Valdorcia”: it maintains characteristic medieval traits, in contrast with the Renaissance style of Pienza. Its walls, the remained towers, the church and the little houses seem to have changed little over the centuries. What we loved most here is the marvellous, scenic, winding road lined with cypress trees that lead to the village: you won’t forget it!

Here our visit ended, but if you have more time to spend in the area, you can visit the beautiful La Foce Garden we have written about in a previous post, and, most important, make several stops along the road to take pictures and enjoy the views: the landscape is the real star of this part of Tuscany, that since 2004 has been a UNESCO World Heritage site to be is “an exceptional reflection of the way the landscape was re-written in Renaissance times to reflect the ideals of good governance and to create an aesthetically pleasing pictures”. Seeing is believing!