A few kilometres before Chianciano Terme the gently undulating hills of the Val d’Orcia come to meet the white and arid badlands of the Sienese Crete. Here, on the point where the four roads to Pienza, Montepulciano, Sarteano and Chianciano intersected and still converge, there is an enchanting place that is a crossroad itself: that between the history of this part of Tuscany and the story of a fascinating woman, attentive witness to her times that entrusted us all with her splendid garden that is an example of perfect harmony and pure beauty: this place is called La Foce, this woman is Iris Origo. 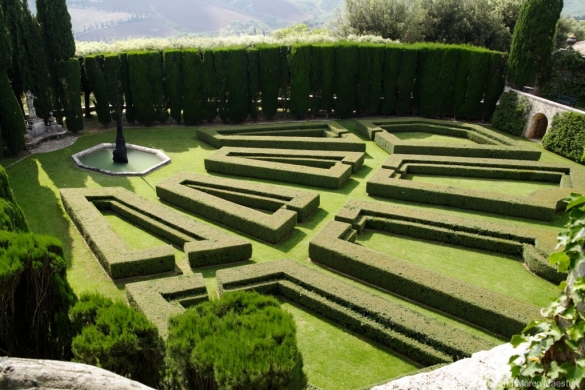 “La Foce” Garden is located within the homonymous estate, founded in 1498 by the Hospital Santa Maria della Scala in Siena as an hostel for the pilgrims going to Rome along the famous Francigena road.  For centuries the hostel was owned by the potent Hospital, till the requisition of many ecclesiastic properties by the Grand Duke Peter Leopold of Lorraine that ruled Tuscany from 1765 to 1790, and in 1924 the estate was bought by the Marquises Antonio and Iris Origo.

The knowledgeable, passionate and careful Sybilla – the guide that led us through the gardens- not only described what we was visiting, but also told us compelling parts of Iris’s life, an Irish-American writer born into a wealthy milieu that adopted Italy, and Florence in particular, as cultural home for the same evocative atmosphere that inspired the poetry and prose of many artists, such as Henry James, and the works of painters like J.S. Sargent. When Iris was still a little child, her mother decided to move to the hills of Florence with her. Years went by and Iris met her Italian husband, Antonio. Together in 1924 they decided to buy the estate of La Foce. Their friends may have thought the couple was mad, since the Val’Orcia was really unwelcoming those times: the landscape was beautiful, but at the same the area was extremely wild, dry and poverty-stricken. Nevertheless, Iris and Antonio decided to settle at La Foce and in the following years they worked hard to transform the land and make it fertile, and to improve the living conditions of the population: among other things, they created a school for the local children, and founded a sanatorium for kids affected by tubercolosis. 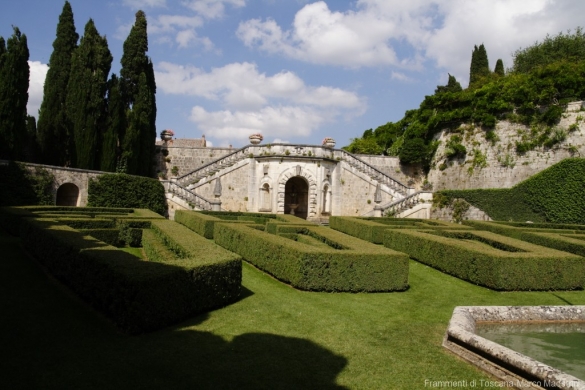 Iris’s story went through the 1920s and the 1930s, together with her garden that grew in phases between 1924 and 1939, and was excellently designed by the English architect Cecil Pinsent, that Iris met in Florence while he we was working at “Villa Medici”, the noble estate bought by Iris’s mother on the Florentine hills. The garden is characterized by a series of terraces divided into geometrical ‘rooms’ by box hedges, fountains, travertine steps and walls: the first garden, the garden of lemon trees, the rose garden with its wisteria-covered pergola and the lower garden all reflect the great ability of the architect, capable to follow the peculiar morphology of the ground and nestle his splendid work in the marvellous scenario of the  Val d’Orcia. The view over the valley and the Mount Amiata from the terrace of the second garden (that of the lemon trees) is truly breathtaking: the panorama offers a perfect integration between human work and natural landscape. 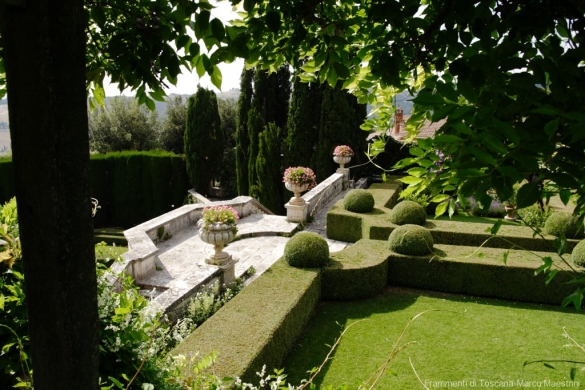 Iris’s story went on through the fascism, the Second World War, terrific bombings, the Nazi occupation of Italy and the partisan struggle on the Tuscan hills and mountains, as Iris herself narrated in her book “War in Valdorcia”, that together with the “Merchant of Prato” is her most renowned work. The guided tour took an hour: these words and the pictures we took may have inspired you to make a visit. Yes, it’s the best thing to do: nothing compares to a direct experience in this enchanting place.

In 2016 the garden is open to the public from March 26th to November 1st – guided visits only – every Wednesday afternoon (guided visits starting at 3pm, 4pm, 5pm and 6pm ) and every Saturday, Sunday and National Holidays with guided visit beginning at  11:30am, 3pm and 4pm. Ticket € 10,00 includes the 45-minute guided visit, free entrance for children under 12 accompanied by an adult .  Close for private events on the following Saturdays: April 2, June 4, June 18, July 16, August 20.
The garden can be missed since is not so well indicated along roads, thus follow these GPS coordinates and you’ll find it easily: latitude 43.030753, longitude 11.779346. Moreover, the estate offers holidays houses and a bed and breakfast is available 500 mt. from the main Villa, that can be also rented. To this regard, further information can be found on the estate’s website.

If you have the opportunity, a visit to the Garden during your stay in Tuscany is absolutely worthwile for a profound insight into the history of the Val d’Orcia and to admire an enchanting landscape: a perfect harmony between the natural environment and the human intervention, something we all should bear in mind making our temporary travel on this Earth.