Home Siena and surroundings The Abbey of Monte Oliveto Maggiore

The Abbey of Monte Oliveto Maggiore

The last time we went to the Abbey of Monte Oliveto Maggiore, in the midst of the splendid Sienese Crete, was late October last year. The weather was still nice and warm, and we spent a beautiful afternoon there. Nevertheless, Springtime is in my opinion the best period of the year for a fascinating day trip to this marvellous place, where these typical Tuscan hills are now intense green in colour. 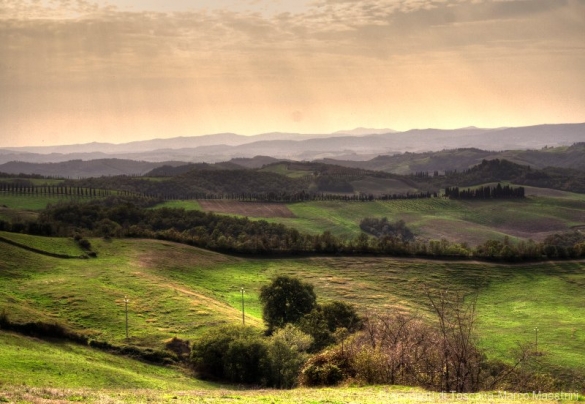 The Abbey is in the territory of Siena,  between Asciano and Buonconvento, lies on a hill covered with cypresses, pines and oaks, and overtops the white badlands (an erosion phenomenon typical of this area) of the Crete.  After parking the car in one of the car park just outside the sacred complex, the monastery is accessed through a drawbridge which leads to a medieval palace in red brickwork, which is the fortified gate of the Abbey. After the entrance, a narrow path in the midst of a century-old forest leads to the core of the complex. The Abbey was funded in the early 1300s by Bernardo Tolomei, from one of the rich and most influential families in Siena,  who decided to become a friar and established this Benedictine monastery with reference to the Mount of Olives and the Passion of Christ. In the Middle Ages, many pilgrims and wanderers received shelter, comfort and medical care at the Abbey, as it lied along the old pilgrim road Via Francigena that from Northern Europe and France led to Rome.

From an architectural point of view, the monastery is made up of different buildings constructed between 1300s and 1700s, and organized around three cloisters of different dimensions: the Chiostro Grande (Great Cloister), the Chiostro di Mezzo (Middle Cloister) and the Chiostro Piccolo (Small Cloister).  The Great Cloister shows a series of frescoes of the Life of St. Benedict painted by the painters Luca Signorelli and Giovanni Bazzi known as Il Sodoma, considered amongst the most important Renaissance artworks in Italy.  The church, dating back to 1400s, shows Il Sodoma’s further artworks and a magnificent wooden inlaid choir by Giovanni da Verona, one of the most outstanding examples of tarsia in Europe.
The Middle Cloister and the Small Cloister, also built in 1400s, are devoted to seclusion and can not be visited, with the exception of the entrance to the refectory. The stairs leading to the first floor, also decorated by Sodoma’s frescoes, bring to the Monastic Library, housing some 40,000 volumes and incunabula. From the library is the access to the Pharmacy, housing, in 17th century vases,  a collection of medicinal herbs. 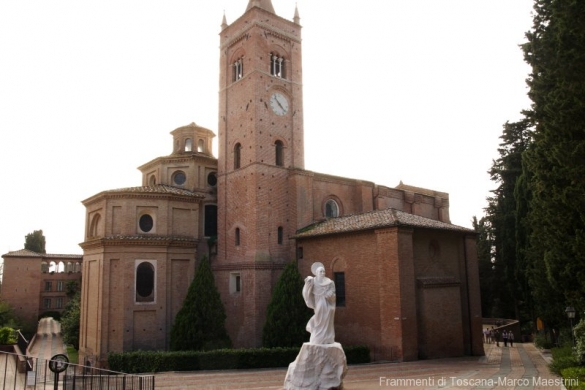 After the enchanting visit to the sacred places, we went to the cellars, where wines still produced in the lands of the Abbey can be tasted and bought, along with other  products such as olive oil and beans. It has to be noticed that during several Masses the Monks still pray with the inspirational Gregorian Chants.

Finally, we recommend to end your trip with a visit to the graceful medieval hamlet of Chiusure, just one kilometre away from the Abbey. The village is really nice, visitors can walk up and down its tiny streets surrounded by the typical red brick buildings. Moreover, in Springtime the visit can be scheduled in the occasion of the events dedicated to the excellence of the village: the artichoke!  This year the Artichoke Festival (in Italian “Sagra del Carciofo”, where sagra means an event dedicated to a particular food)  will be organized from Thursday, April 25th to Sunday April 28th and will offer its street restaurant, the market of typical products, games, exhibitions and street music till late in the evening. If you’re in Tuscany in late April, DON’T REALLY MISS IT!!!!!!!!! 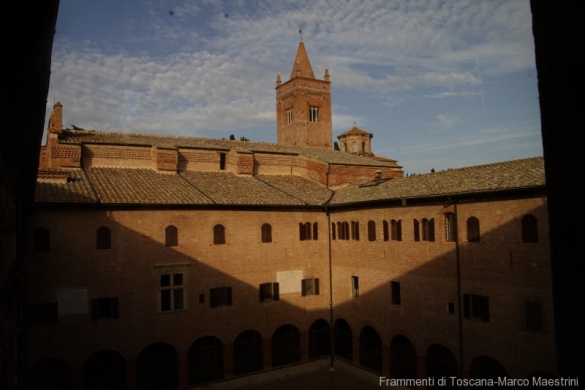