Look at this picture of men whose faces are covered by wired cowls, in the darkness lighted up by torches: guess where we took it. 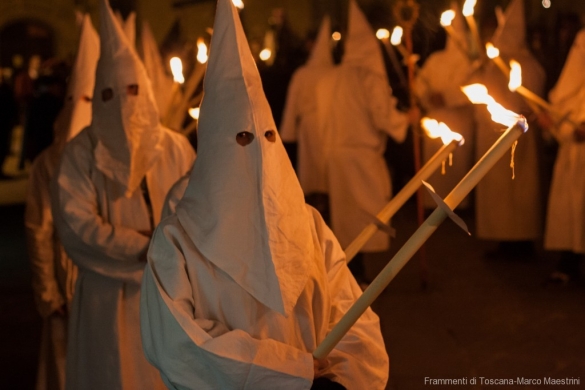 In Sicily? In Andalucia? Actually, this style of Easter Week processions are typical of Southern Italy and Spain,  but in this case, we didn’t have to go that far: we just drove from Arezzo towards Cortona and some kilometres before the city we stopped in the beautiful medieval hill hamlet of Castiglion Fiorentino, where from centuries Holy Week solemn Processions have been commemorating the Passion and Death of Jesus Christ. 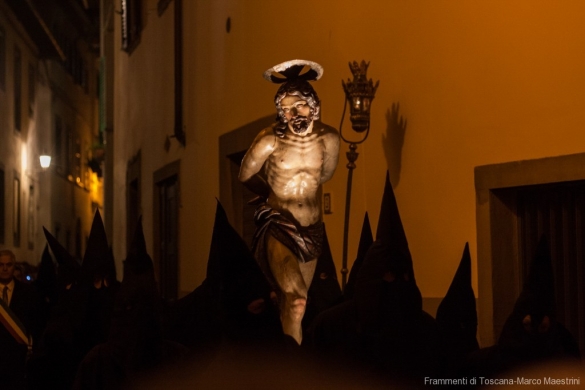 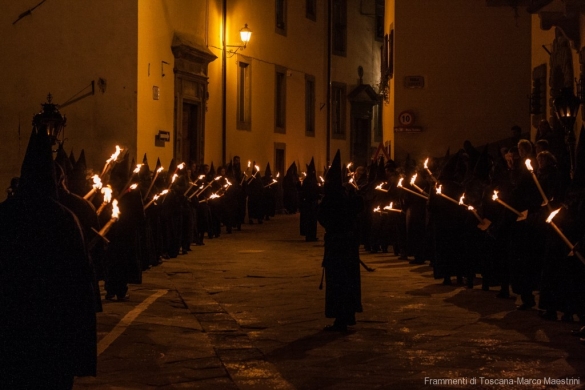 The events of the Holy Week in Castiglion Fiorentino culminate in the Easter Vigil Mass on Holy Saturday,  after sundown, when   the Volata, the traditional run with the statue of the Resurrected Christ in the Collegiate Church, takes place.  If you are in the surroundings, don’t miss the evocative processions during the Holy Week and the Easter Vigil Mass, amazing opportunities to deeply breath the solemn atmosphere of the Holy Wee and appreciate the enchanting backdrop of this Tuscan lovely medieval hamlet.

Another popular procession on Good Friday is the  Giudeata in Chianciano, in the province of Siena, a traditional parade held since the 17th century will take place through the streets of the centre, with participants dressed in historical costumes of the time of Jesus Christ.

Also in Pienza, the precious jewel of the Renaissance in the Val d’Orcia, the Passion of Jesus Christ is commemorated on Good Friday, with the statue of the dead Christ paraded along the main streets and squares of the beautiful centre by barefoot walkers-on.

Three enchanting hamlets, three evocative events to fully immersing in the sacred Holy Week in Tuscany and celebrating the joy of the Resurrection.