Home Cortona and surroundings A September afternoon in Cortona

A September afternoon in Cortona

Last Sunday we spent our afternoon in Cortona, a lovely hill town that we often visit for being an enchanting hamlet that offers a wide range of things to see and do.  A winding road goes uphill through olive trees, vineyards, farmhouses and villas, and leads to the town, that is magnificently enclosed by its ancient walls dating back to the Etruscans. The view of the surrounding landscape of the Valdichiana and the Trasimeno lake is simply eye-catching, and the nice little streets, the cafés, and the rich programme of events taking place throughout the year are just a few reasons for our frequent visits to this charmig town. 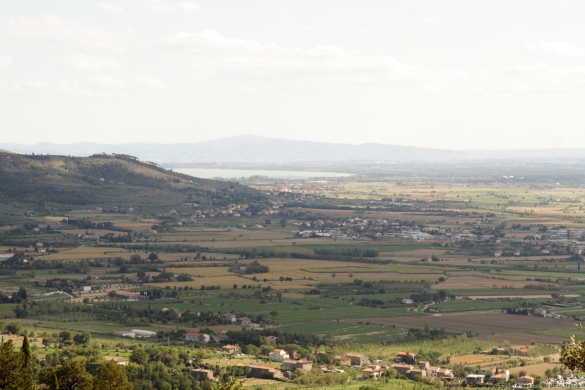 Cortona has been certainly popularized by Frances Mayes’s book “Under the Tuscan sun”, but much more before this international fame, the town was considered by the people living in the surroundingsas a classic destination for the Sunday afternoon stroll. The town was an Umbrian city, then conquered and expanded by the Etruscans, becoming one of the most powerful among their capitals. Etruscan remains can be  admired in the basis of the city walls and in the tombs of many Etruscan princes that were discovered in the surrounding territory. Moreover, in the central Piazza Signorelli square, the MAEC Museum (Etruscan Academy Museum of the City of Cortona) is specifically devoted to the Etruscan civilization in Cortona, and in addition to its permanent collection, often organizes temporary exhibitions about this era.

Later on, Cortona was conquered by the Romans and after the obscurity of the Early Middle Ages, came back to splendour in the 13th century as a city state (that was eventually conquered by the Republic of Florence and lost its independece in early 15th century). This period had a significant impact on the characteristic medieval style of the town, shown by the narrow steep streets, the numerous medieval churches and, above all, the main square Piazza della Repubblica, with its imposing staircase that gives access to the Town Hall, also called the Captain Palace. 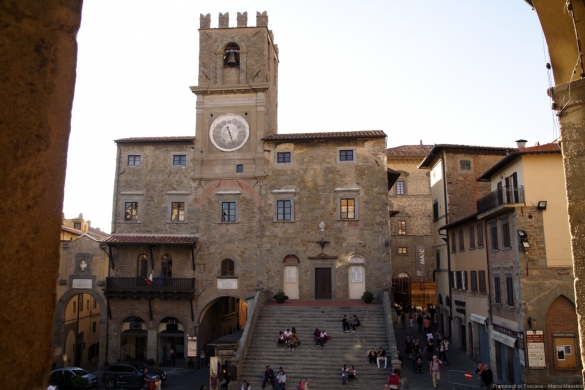 As I stated before, Cortona is not only rich in monuments and things to see, but also in events of great importance and visibility: last Sunday we went to the third edition of Cortona on the Move, the festival of photography in travel.  We visited the Festival last year and found it very interesting and well organized, thus we decided not to miss the 2013 edition. Also this year the festival is located in different places (the Fortress of Grifalco that dominates the town, the Old Hospital, the former meat market, the Ferretti Palace, the Vicolo del Gesù alley, the Church of Sant’Antonio, and the Farm  “Tenimenti d’Alessandro” in Manzano, on the surrounding hills), where the  exhibitions of international photographers display different travel experiences, being the Voyage  meant not always in terms of geographic and cultural discover of a place, but also like  a “real or ideal path, fantastic, imagined and sometimes shocking, disruptive and revolutionary…discovery of the self and the other”.

Because of this concept of travelling, you won’t only find pictures of different countries and places, but visual proposals that show who are the last nomad populations of the boreal emisphere and their living conditions, what men and women are ready to do in the name of beauty and the myth of eternal youth, why men tends to instinctively seek crowd situations…and much more.

Being located in different places, the Festival is also an opportunity to visit places that are normally closed to the public or used for other purposes.  The Festival will continue till September 29th: open daily 10 a.m.-1 p.m. and 3-8 p.m., except the Fortezza which opening time is 10 a.m.-1 p.m, 3-7 p.m., ticket including all exhibitions 10 € (valid till the end of the Festival), tickets for single exhibitions 5 or 3 € depending on the location. For further information http://www.cortonaonthemove.com/index.php?cID=124 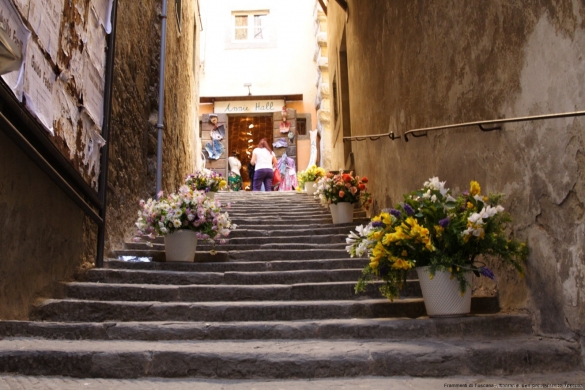 Moreover, if during your stroll you feel like eating, you can taste very typical snacks at the Fett’unta, a small and nice country restaurant located in Via Maffei, just a few steps away from the main square; and if you wish to have a more complete and refined meal, just opposite  the Fett’Unta the spectacular Osteria del Teatro will simply delight you. They both have been personally tested by us during our recent visits to the town.

Have a nice trip!