I hadn’t visited the famous tuff towns of Maremma (Pitigliano. Sorano e Sovana) before my last birthday, when we decided to spend the whole weekend in this marvellous area of Southern Tuscany. And we couldn’t be happier with our decision! 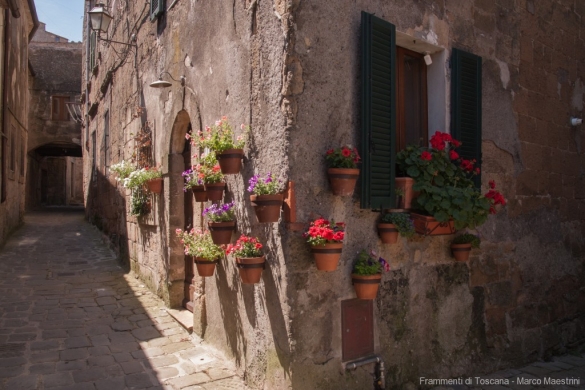 We went to this magic tuff triangle last June, and we took advantage of the sunny but still fresh weather and the long days of early Summer.  The landscape was gorgeous, dominated by fields, olive trees, woods and grassy grazing lands. 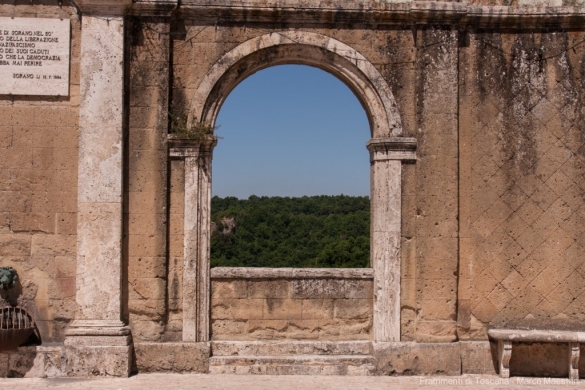 We stayed at the Villaggio Le Querce in Sorano, a very nice residence with  fully equipped  apartments immersed in a wonderful park of oaks, with a small but lovely swimming pool, a play-area for children, barbecues and a Wellness Center, carved into the typical tuff rock. Our voucher included a couple of hours in the wellness centre, thus we immediately went there after our arrival and we enjoyed a relaxing jacuzzi, the sauna and the Turkish bath, completely alone since you reserve your access time at the reception and your privacy will be total!  Several kinds of massages (couple, total body, holistic etc). 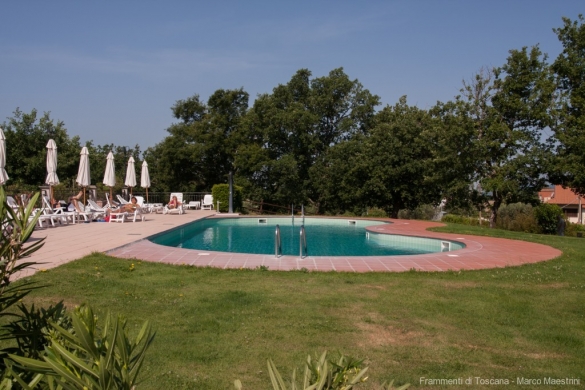 
After this relaxing break we started our discovery itinerary and we got to the centre of Sorano, a jewel lying on a tuff stone (a rock of volcan origin) and visible for miles from the roads leading to it. In particular, if you come from the north, the town will show up  in its entirety and you can admire its enchanting shape. The town dates back to the Etruscan, but the labyrinth of its alleys, little squares and corners reflects the Medieval development of the hamlet. We stroll about and then went up to the Orsini Fortress. Time seemed to have stood still, the silence was impressive and from above it was like the houses and buildings were built on top of each other! 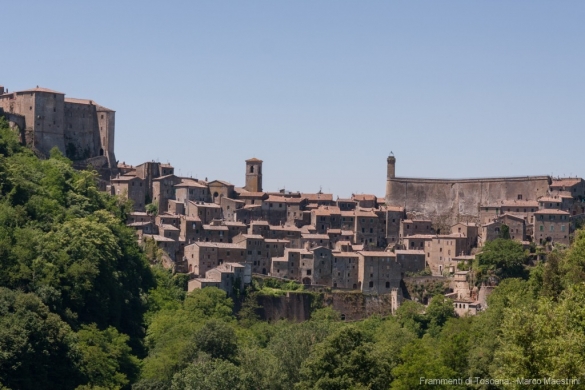 Sorano – View from the northern road


The territory of Sorano is dotted with Etruscan remains, that are preserved through the  Archaeological Park  “Città del Tufo”  (click here for all sites and information)  that spreads across a vast area, heavily marked by the erosive action of the rivers and, hence, by a striking, delightful landscape, displaying a wealth of deep canyons. One of the most interesting sites in the park is the hamlet of  Sovana, with its Etruscan necropoles and tombs. The Ildebranda tomb,  discovered in 1924,  has a unique architecture recalling a Greek temple, and is one of the most impressive Etruscan funerary monuments of the whole Etruscan territory.

Sovana is also a medieval hamlet, perfectly preserved: that is due to the fact that after the Middle Ages, it was completely abandoned and forgotten. This sad side of history has allowed us to visit an intact medieval town where also the main monuments  (in particular, the three churches and the Palazzo del Pretorio) have preserved the artistic traits of the medieval period, as they were not modified in the Baroque era, as happened elsewhere (in the majority of cases, to be honest). 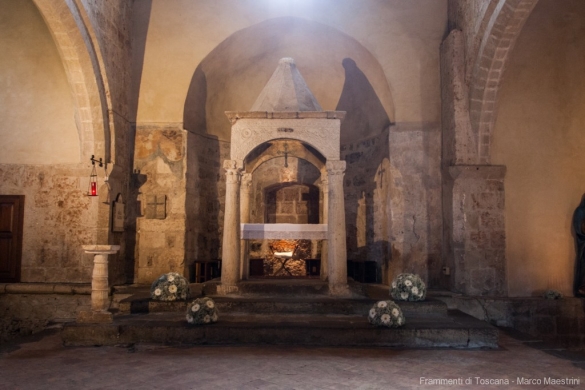 The Pre-Romanesque Tabernacle  – Church of  Santa Maria Maggiore  in Sovana

The main square is lovely, the Via di Mezzo is the brick-paved  main street of the hamlet, and another enchanting corner is the  Co-Cathedral dedicated to Saints Peter and Paul, a little isolated at the end of the village and immersed in the countryside: simply enchanting.

It was built in 8th and 9th centuries,  slightly renovated in the following centuries  but in a way that didn’t change its original features. Inside, it’s divided into a Gothic-style cross and covered in white marble and cream-coloured tuff rocks. 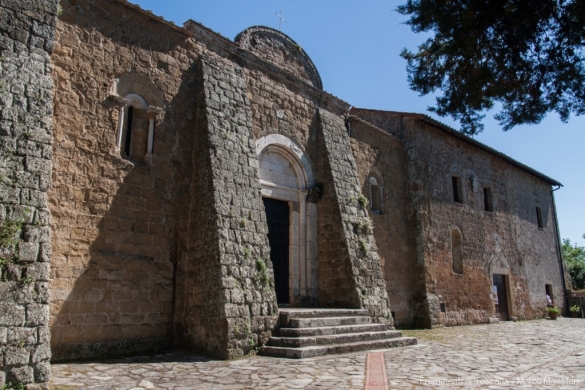 Ouside of the Co-Cathedral in Sovana

After the intense afternoon, we spent the evening at the eco-friendly farmhouse “Agriturismo Biologico Sant’Egle”, where we had a delicious dinner. An enchanting place, in the midst of the countryside, where the your owners cultivate all their products according to the organic farming. Here’s their website, if you happen to be in the area, don’t miss this little jewel for your stay or just a dinner. It is remarkable!

The morning after, we enjoyed the gentle sun of  June in the swimming pool of Villaggio le Querce and after this pleasant way to start the day, we visited the pearl of the area…Pitigliano. 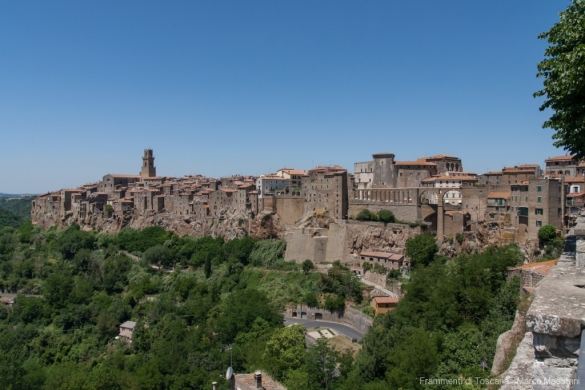 Pitigliano, the pearl of the tuff towns, also called “The little Jerusalem”


The view if the town from the any of  roads approaching to it is simply breathtaking. It lies on a yellow cliff of tuff, and has been built on different levels of the stone it hangs from.  Surrounded by nothing but the nature, it is simply astonishing. The arcs of the aqueduct  constructed by the Medici family that conquered the town pleasantly runs through the harmonious profile of the town. After the entrance gate, the Fortress Orsini, now a Museum, dominates the cliff and, together with the tuff rock itself and its parapets, protected the hamlets for centuries.

We walked the narrow and medieval streets and alleys, admiring the little houses, the small doors, the balconies and terraces adorned with colourful flowers, meeting the inhabitants (the town is not so touristy and you don’t have at all the feeling to be in a open-air museum) and many cats that were staring at the warm sun. 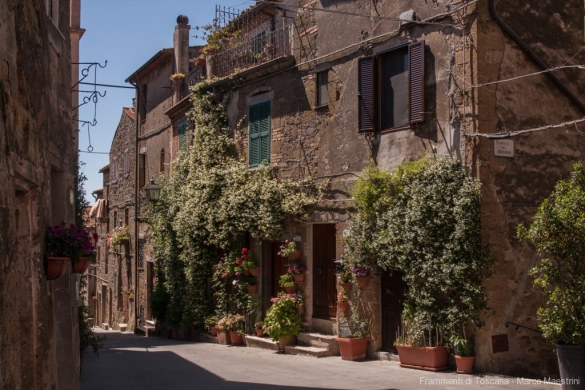 The centre of Pitigliano

Obviously, we couldn’t miss the Old Jewish quarter: the entrance is beneath an arch in Via Zuccarelli. Pitigliano in also called the “Little Jerusalem” since in its past it hosted a prosperous and numerous Jewish community.

Jews settled in Pitigliano at the end of the 15th and beginning of the 16th centuries, and mainly arrived from the the nearby Lazio region, that was under the control of the Pope who, periodically, drove out the Jewish population. The feudal lord that administered Pitigliano decided to host the Jews that, very often bankers and artisans, could revitalize the economy of the hamlet, mainly based on agriculture. 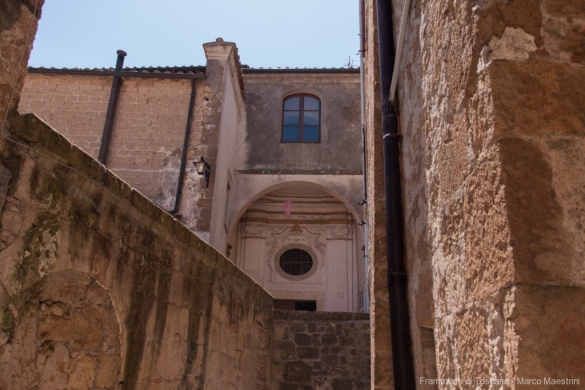 Outside of the Synagogue in  Pitigliano

After the Medici family conquered the town, that became part of the Grand Duchy of Tuscany, Jews in Pitigliano were confined to a ghetto, of which it is possible to visit the  Synagogue, the kosher butcher, the bakery, the wine cellar, the ritual bath and a textile-dyeing room. Even during their segregation in the ghetto, the relationship between the Jews and the local Christian community remained good and friendly.  At the end of the 18th century the ghetto was desegregated, and more Jews arrived in Pitigliano, as a consequence of the intolerance they suffered from in other cities and towns of the surroundings.

The Jewish community of Pitigliano was prosperous till the reunification of Italy; the new State granted them equal rights and allowed to move freely about the country. Many left for Florence, Rome and elsewhere. The Fascist racial laws applied in 1938 and then the Nazi occupation that condemned Jews to massive deportation to concentration camps, determined the end of the community in Pitigliano.  It has to be mentioned that many Jewes of Pitigliano survived the war and the German occupation thanks to the Catholic inhabitants that  hid them. In 1960 the Synagogue closed down but the history of respect and friendship  between people of different faiths is remarkable as it was a real and concrete example of integration.