Home Florence and surroundings In the new lands of the Florentines: the hamlet of Scarperia, Mugello

In the new lands of the Florentines: the hamlet of Scarperia, Mugello

When at the end of the High Middle Ages Florence was one of the most flourishing and potent cities in Europe the Government, controlled by the rich class of merchants, decided to found five “new lands” to reorganize a part of its countryside and utilize in a more efficient way the resources and structures of the surrounding rural areas. We have visited one of these new lands, Scarperia, a beautiful hamlet in the lovely area of the Mugello, to the North of Florence .

The new lands were founded by the Florentines between the end of the XIII and the first half of the XIV century to consolidate their presence in the territories of Valdarno (with the creation of San Giovanni, Castelfranco e Terranuova, today called Terranuova Bracciolini), and Mugello, where  Firenzuola and Scarperia were founded.  Both zones were close to the dominant city but still controlled by potent feudatories that were attempting a last, extreme resistance to the expansion of Florence and the new bourgeois social system. That’s why the powerful city decided to reorganize these areas around new towns that had a function of outposts and were connected to the capital city.

During our visit to the Mugello, a couple of weeks before Christmas, we visited Scarperia, founded by Florence in 1306 with the name Castel San Barnaba to contrast the Ubaldini, the most powerful feudal family of the territory. The name of Scarperia was probably acquired because the place where the town stands is characterized by a steep scarp (scarpata, in Italian). In order to populate the new land, Florence established 10-year fiscal exemptions for the people deciding to move to the new hamlet, and doing so attracted many inhabitants of the neighbouring communities and castles.

As for the urban layout of Scarperia, similarly to the other new lands it derived from the Roman system: similar to a rectangle, with an inner grid of streets and a main road with the gates Fiorentina to the South, and Bolognese to the North, open onto the walls built for defence purposes. The heart of the historical centre is the main square, dominated by Palazzo dei Vicari, a fortress palace that in the past was seat of the Vicarious, the representative of the Florentine Government. 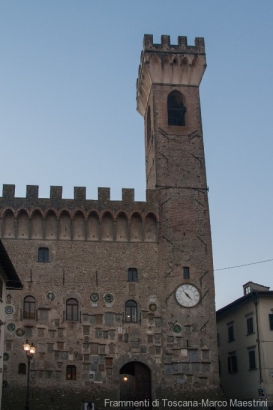 The Palace, that reminds of the renown Palazzo della Signoria in Florence, has a facade adorned by the coats of arms of the Florentine Vicarious. We went in for the visit and we saw all the official rooms used for centuries by the town representatives and the Museum hosted in a part of the Palace, devoted to the tradition of the knife-making. 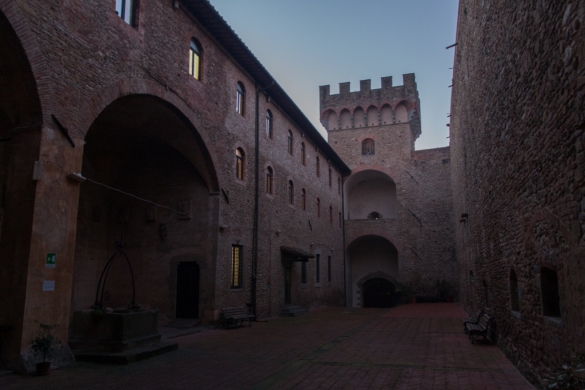 
Since its foundation, Scarperia has been a very important centre for the handmade production of knives and other cutting tools as scissors, daggers and spears: this mastery has been the town’s main economic activity. The Museum shows the importance of knives in the history and daily life of Scarperia, and also the scenes of workshops, rural kitchen and other spaces are reconstructed. The Museum ends with  the “knife-maker workshop”, which is located next to the Palace. Palazzo dei Vicari and the Museum of Cutting Tools are open from October 1st to May 31st on Wednesday, Thursday and Friday from 10 a.m. to 1 p.m., and on Saturday, Sunday and public holidays also from 3 p.m to 6:30 p.m.; from June 1st to September 30th, Wednesday to Sunday from 10 a.m. to 1 p.m, and from 3:30 p.m. to 7:30 p.m; tickets € 4,00, people over 65 and students under 25 € 3,00, children aged between 7 and 14 € 2,00, free for children under 6,  tourist guides, journalists, disabled people. 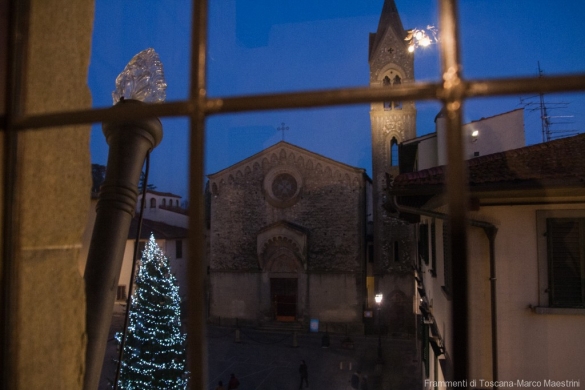 The Church of Propositura seen from Palazzo dei Vicari

Other interesting monuments in Scarperia  still facing onto the main square but opposite the Palazzo dei Vicari are the Church of the Propositura and the Chapel of the Madonna di Piazza, dating back to around 1320, where the newly-nominated vicars vowed fidelity to the Florentine Republic.

Finally, just a few kilometres from Scarperia, it is worth a visit the small hamlet of  S.Agata, strategically built on one of the most important Medieval roads, that connected Florence to the trans-Apennine town of Bologna, and still dominated by a very ancient Romanic church (dating back to the XI century),  that is the most relevant sacred building of the entire Mugello. 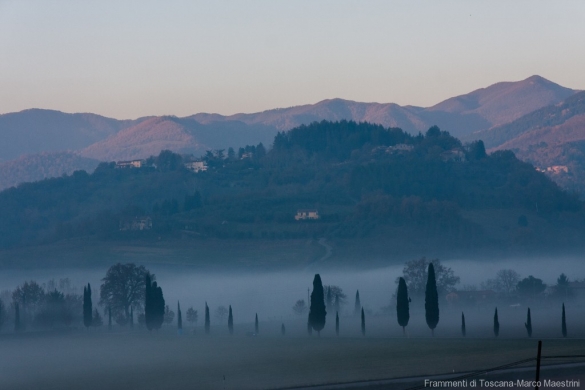 On the road to Sant’Agata

A very pleasant day in a lovely territory, the Mugello, rich in art, culture and with a splendid natural environment. We’ll be back soon to discover other hamlets, views and flavours.