Medici Villa in Poggio a Caiano: loves, intrigues and poisons

Since 2013 twelve Medici Villas and two Medici Gardens of Tuscany have been part of the UNESCO World Heritage. The House of Medici was a powerful family that in the Middle Ages attained political power in the city of Florence through its fortunes as traders and bankers, and supported arts and humanities that made Florence the cradle of the Renaissance. Later the dynasty became hereditary Dukes of Florence, and then Grand Dukes of Tuscany till 1737, when the last representative of the family died without heirs. We have decided to visit all the UNESCO Villas and report our trips here on the blog.  We started from the Medici Villa in Poggio a Caiano, in the Province of  Prato but just a few kilometres away from Florence, taking advantage of an initiative that last March permitted the security staff to provide visitors with guided tours to the Monumental Apartments of this splenid residence. During our visit we were also told about the intrigues and love affairs that characterized the past of the place. 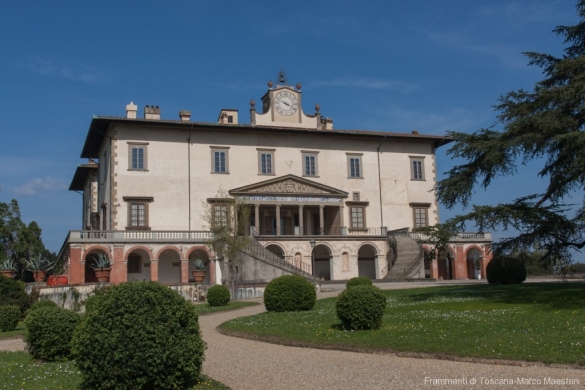 The Villa reflects a perfect Renaissance style, since the architect Giuliano Da Sangallo planned it on a request by Lorenzo the Magnificent, who presided Florence’s Golden Age.  The exterior of the Villa has preserved the original Renaissance features but the two staircases leading to the terrace, that were built in the early 19th century to replace the original ones. The interior underwent several transformations over the years, especially when Florence, from 1865 to 1870, was the capital of the new Kingdom of Italy and King Vittorio Emanuele II used the Villa whenever he went hunting in its surroundings. The modifications of this period specifically concern the austere furniture still adorning the rooms nowadays, the decorations with subjects related to horses and haunting, and the creation of a billiard room on the first floor.

Still on the first floor after the entrance hall, notable is the 18th-century court theatre, commissioned by Gran Duke Cosimo III’s wife, Marguerite Louise of Orléans, Princess of France. Being used to the luxury life and royal balls of the sparkling court of Louis XIV,  she ordered the construction of a place where to enjoy music and plays at the Villa in Poggio a Caiano, where she decided to live in order to stay away from her husband whom she hated and who did not consent to her return to France.

Traditionally, the Villa was a stop for all of the newly married Grand Duchesses, before being brought to Florence for the wedding celebration, and in the 16th century had among its guests also Bianca Cappello, a Venetian noblewoman with whom the future Gran Duke Francesco I Medici fell madly in love. Bianca was married but soon her husband mysteriously died, and her relation with Francesco became more and more evident. The affair was one of the most scandalous of the period, since in the meantime the Grand Duke had married to Joanne of Austria for political and strategic conveniences. Nevertheless, once widow, Bianca was brought to Poggio a Caiano, where it is still visible her apartment together with the stair that – through a secret door – led to Francesco’s private rooms. When the Gran Duke’s wife also died, the two lovers finally got married but not many years later they died at the Villa one day after the other from a long fever, deaths officially provoked by malaria, but long rumoured to have been caused by poisoning by Francesco’s brother, Cardinal Ferdinando, that became the new Gran Duke of Tuscany.  It was particularly evocative to be told about this mysterious story right in the place where it took place! 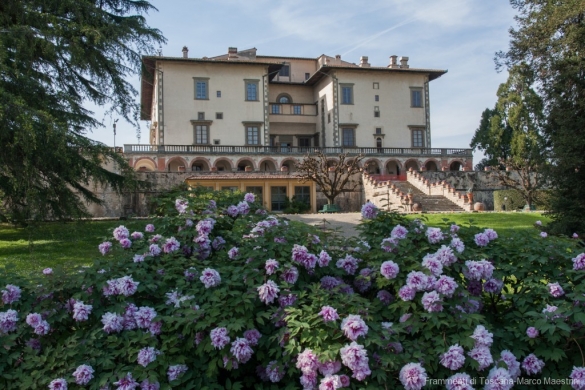 With the Napoleonic conquests, Tuscany passed into the French sphere of influence, and the Villa underwent several modifications according to the neo-classical style and directed by the desires of  Elisa Baciocchi Bonaparte, sister of Napoleon, who was from 1804 the princess of Lucca and Piombino and from 1809 the grand duchess of Tuscany. Poggio a Caiano became one of her favourite residences and it seems that here she hosted her presumed love affair with the celebrated violinist Nicolò Paganini, who gave several concerts in the theatre of the Villa.

On the second floor, in addition to the magnificent Hall of Pope Leo X with frescos depicted, among the others, by Pontormo and Andrea del Sarto, are the apartments used, when Florence was the Capital of Italy, by King Vittorio Emanuele II and his favourite mistress and later second wife, Rosa Vercellana (also known as Bella Rosina), a commoner from Turin. As testimony of this latest love story that played out at the Villa are two beautiful bedrooms, that of the King,  austere as it is the Savoia dynasty style, and that of Rosina, featured by delicate pink flower decorations.

The visit ended in the Hall of the Frieze, where is the original grazed frieze of the exterior lodge, representing the Platonic myth of the journey of the soul and made up of around seventy pieces.  The frieze visible now outside on the lodge is, in fact, a reproduction.  After the visit, we walked through the magnificent gardens, re-arranged in the 15th century in English and Italian style. 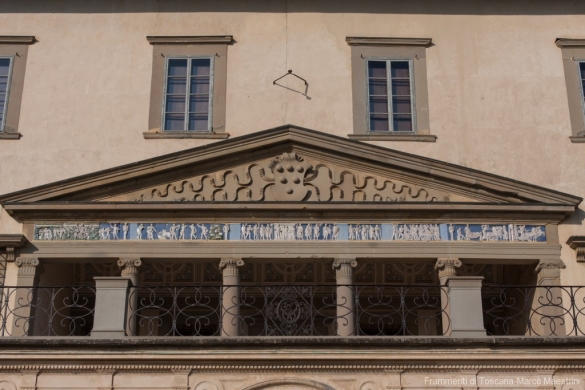 Within the Villa taking pictures is not allowed,  but considering that the admission to the Gardens, the Villa and the Museum of Still life is totally free, it is absolutely worth a visit more than other words.  Opening hours and further information on the official website here.  Apart from specific initiatives as the one we took part in, the security staff only accompanies the visitors to the rooms and  don’t provide guided visits (available only as a service of professional guides), but we do hope that his post can be of help during your visit to this splendid Renaissance jewel. 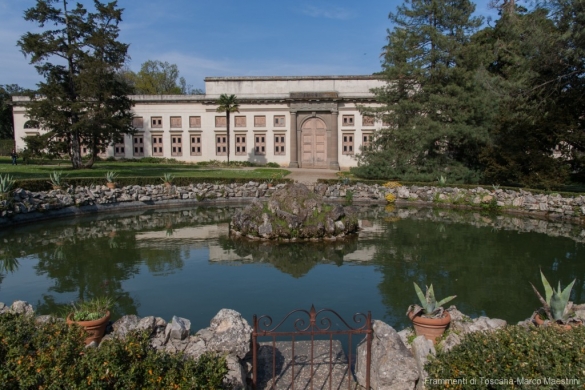 After the visit, we just crossed the road outside the Villa and we had some snacks at the Bar Roberta: after 4 p.m. hot bomboloni filled either with Chantilly cream or chocolate can be tasted, and if you love ice cream as I do, you can treat yourself to a delicious cone or cup with the typical Florentine Buontalenti cream, created by the Architect Bernardo Buontalenti, that worked at the Medici’s court.  The best way to end an afternoon dedicated to the most famous family in Florence and Tuscany.