Home Arezzo and surroundings The Castle of Gargonza in Arezzo’s countryside: a Medieval jewel

The Castle of Gargonza in Arezzo’s countryside: a Medieval jewel

Ingredients: a Sunday afternoon, the idea to make a trip and admire the enchanting countryside between Arezzo and Siena, a medieval hamlet that looks like a picture from a book of history. Result: a visit to the Castle of Gargonza, in the midst of the the Tuscan hills a few kilometres away from Arezzo, the valley of Valdambra and not so distant from Siena.

The Castle is situated in the hills above the town of  Monte San Savino, and getting there entails a winding drive up from the town to the hills; it is possible to reach the castle also either from the Valdambra valley or Rapolano Terme – the latter in the Sienese territory – following the signs to Monte Savino and the Gargonza’s property. The Castle is in the midst of woods and its characteristic tower shows up as soon as you take the small road that leads to the estate. 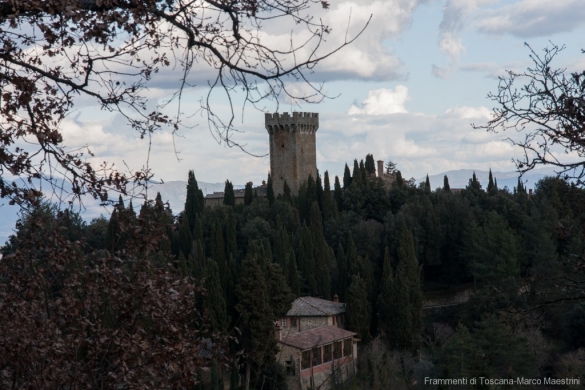 We parked our car in a large space at the Castle’s entrance, and we walked up the path to this marvellous fortified medieval village. It was built in the first half of the 12th century on the road that connected Arezzo and Siena. In the 13th century Gargonza was, as many other hamlets and towns in central Tuscany, sought after by Siena and Florence and in 1304 Dante Alighieri spent some days of his exile here, where he took part in a meeting with the more relevant factions that wished to fight against the Black Guelfs that ruled Florence at those times and had expelled the poet from his native city. Later, the Castle was conquered by Siena, and then by Florence, whose administration was not appreciated by the inhabitants of the hamlet, that started riots, followed then by the reaction of the Florentines who tore down the first circle of walls surrounding the Castle. Only the tower continued, and still continue, to stand and dominate the hamlet. 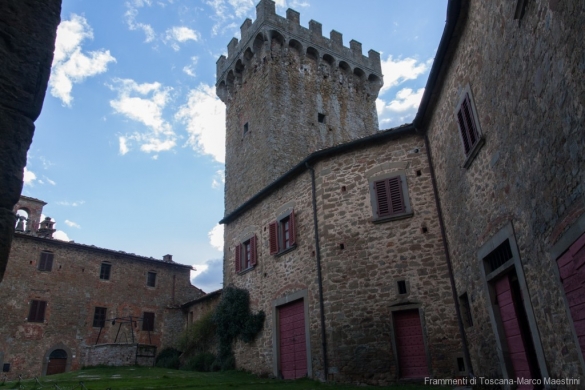 From the 15th century, Gargonza became an agricultural community dedicated to the forest as well as wool production, and then a share cropping farm with houses for farmers and their families. The village already had also a parish, a school, an oil mill, stables, and a common oven for bread. After the end of WWII and the share cropping system in Italy, the Castle was abandoned by the farmers who left for a better life in the city. In the mid-70s a restoration process started with the aim to preserve the village and its original architecture. The hamlet became a tourist centre, where houses and apartments, enclosed within the medieval wall and carefully restored, have been rented to travellers.  Even though the buildings belong to the tourist structure, it is possible to take a walk through the castle and admire its tower, the houses,  the small church, the well, the gardens, the pergolas of wisteria, the small orange doors and windows… 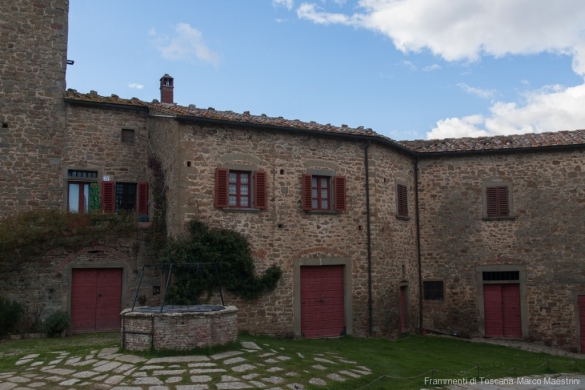 ..only some signs indicate that we are in the modern times and not back to the Middle Ages 🙂

The walk, including the time to take pictures, may take about forty minutes. You can continue your stay in Gargonza either spending your holidays in one of the nice apartments and houses, or have lunch and/or dinner at the Restaurant situated near the car parking.  You can also continue your trip and visit the nice town of Monte San Savino, and the green Valdambra valley, rich in views and medieval castles and hamlets. All great ideas for a pleasant day in Arezzo’s countryside.