Home Arezzo and surroundings Carnival 2017 in Tuscany: the top events!

Carnival 2017 in Tuscany: the top events!

Carnival time is drawing near and celebrations will be colouring streets and squares of Tuscany,  in towns and villages alike.  This is our short guide to the most spectacular, and original events taking place all over Tuscany: plan your trip and, very important, don’t forget to bring your mask and many, many confetti!!! 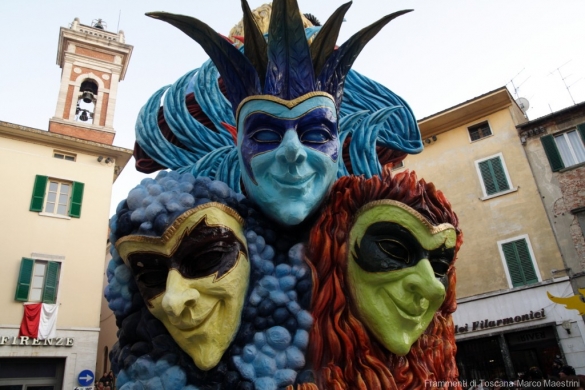 Carnival in  Foiano della Chiana (25 km from Arezzo),  Sunday, February 5th, 12th, 19st and 26th and March 5th–The Carnival organized in Foiano is the oldest in Italy, dating back to 1539!  The pretty medieval hamlet is nice all year round but surely the Carnival celebrations bring colours and fun to both inhabitants and visitors: four huge papier-mâché allegorical floats, constructed by the four neighbourhoods of the village, will parade through the streets and be not only admired by the participants, but also evaluated by a jury, that on the last days of celebrations will proclaim the victorious one.  During the Carnival parades, the hamlet is really crowded, thus we recommend that you park your car in the free car parking outside the centre and take the free bus going back and forth between the outskirts and the venue of the event.  The floats parades begin at 3:00 p.m. on February 5st, and at 12:00 noon on the other  Sundays. The entrance is 9€ for adults, but several reductions are available for children, families and groups. This is the official website of the event where you can find any further info (unfortunately, in Italian only)  http://www.carnevaledifoiano.it/notizie/96/ITA/125/Carnevale-2016-Le-date 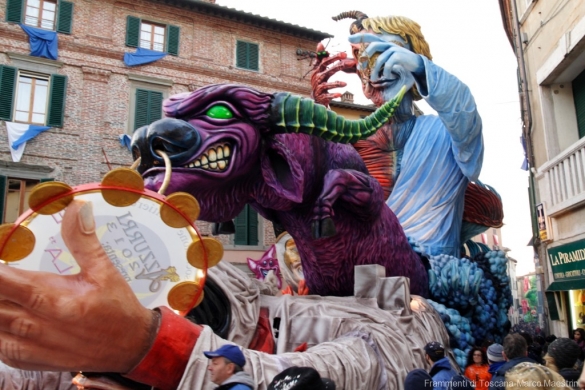 Carnival in Viareggio (30 km from Lucca), Sunday, February 5th, 12th, Saturday, February 18th  by night, Sunday, February 26th,  Tuesday, February 28th – If the Carnival in Foiano is the oldest, the one in Viareggio is the more popular in Tuscany and broadcasted also on the national television. Here too the atmosphere is funny and coloured thanks to the huge floats, representing politicians and other satirical characters, that parade down the city promenade  surrounded by music and dances. Also ordinary people disguise themselves to fully participate in the most extravagant and craziest period of the year.  Cost of tickets is 18€ for adults, reduced to 15€ for the first and the last parades (February 5th and 28th), other reductions are available for children, groups and subscriptions to the 5 parades.  It is possible to buy  your entrances online through website http://www.vivaticket.it/ita/opr/carnevaleviareggio You can find further information in English here http://viareggio.ilcarnevale.com/en/

Figli di Bocco Carnival (15 km from Arezzo), Sunday, February 12th and 19st – Let’s go back to the territory of Arezzo to take part in that I find to be the most peculiar and fascinating Carnival in Tuscany: the event is animated by mysterious masks wearing elegant Venetian-style costumes, rich in details and jewels, realized by the inhabitants of this nice hill hamlet.  The parade began exactly 20 years ago and is definitely worth a visit.  At 2:30 p.m. the costumed characters appear and each one takes its specific  place where it stands to be admired by the visitors who pass by and can vote their favourite one. Later at 5:30 pm all the characters meet up and  parade through the streets. On Sunday February 19th, at 6 p.m. the most voted mask will be proclaimed by Bocco, the King of the Carnival. Entrance 7€ for adults, free for children up to 10 years of age. 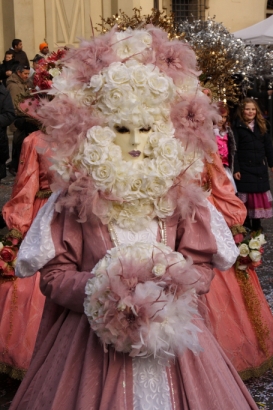 One of the gorgeous costumed characters of Figli di Bocco Carnival

Historic carnival in Bibbiena (20 km from Arezzo), dates to be confirmed – Still in the territory of Arezzo, in the Casentino valley, the  town of Bibbiena celebrates its historical carnival linked to a legend dating back to the Middle Ages. The main character of it  is a young beautiful commoner, named Mea: she was so pretty that the son of the local Lord contended for her love to the point that he kidnapped her, despite she was already engaged to Cecco the weaver.  In order to put an end to this conflict, the Lord decided to liberate the beautiful girl that got back in her fiancé’s arms: the end of the hostile  atmosphere that had worried the entire community was celebrated with a huge party, and the “apple of peace” was burnt as a symbol of purification from the bed times. The historical Carnival recalls this ancient legend by recreating a perfect medieval atmosphere, with the market of fruits and animals, taverns, ancient games and shows.

Besides these top events, almost all the towns and villages in Tuscany, even the tiny ones, organize their own carnival, animated either by floats, parades of costumed characters or jokes and plays on the streets: join one of these parties, toss your confetti  and celebrate with us the craziest period of the year. Have a great fun! 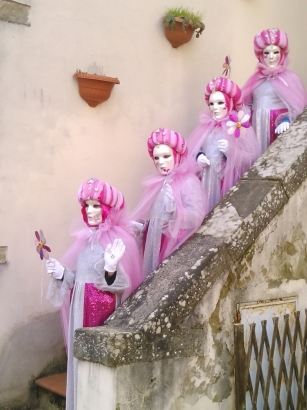