Sited in a valley south of Montalcino, the famous city of the Brunello wine, on the road leading to the Mount Amiata, just before the small village Castelnuovo dell’Abate,  Sant’Antimo is the most beautiful of the Tuscan abbeys and creates an intense atmosphere of mysticism and spirituality. In the midst of a solitary plain protected by rolling hills, this Romanesque church stands peacefully, simple and austere in style, and clear in colour. 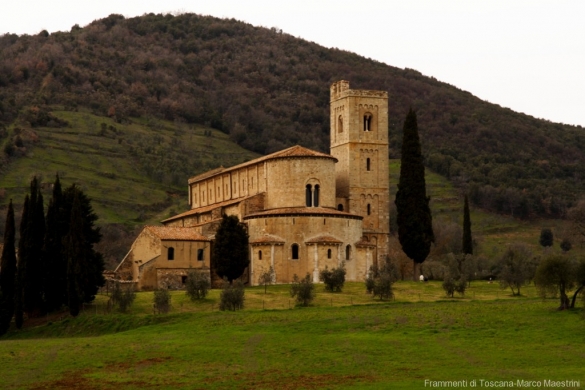 We parked the car along the descending road to the abbey, walked to the Church, and crossed its surrounding meadow disseminated of big olive trees. On the new soft and intense gree grass,  some people were having a picnic under the relaxed glance of monks walking around the abbey or talking to visitors. 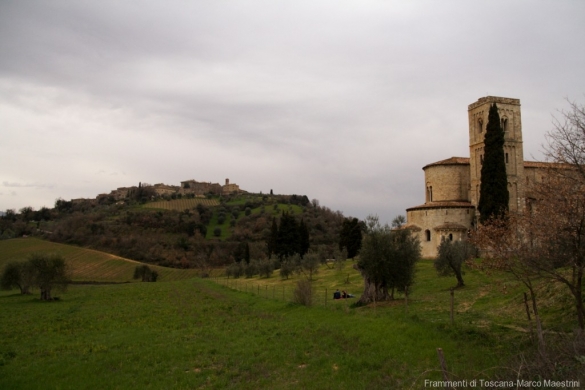 Middle Ages, its mysteries, faith, history and legends clearly dominate this place: tradition has it that the imperial abbey was founded by Charlemagne in 781 on his trip back from Rome, after he fell ill nearby and prayed for deliverance, even though there is no evidence for this popular tale and the first documentation dates back to a deed of the Emperor Louis the Pious (son of Charlemagne). Surviving from the original 8th-century monastery church is the Carolingian chapel (now used as a sacristy and not open to visitors), with its small apse next to the main 12th-century apses, and the crypt beneath the present church. 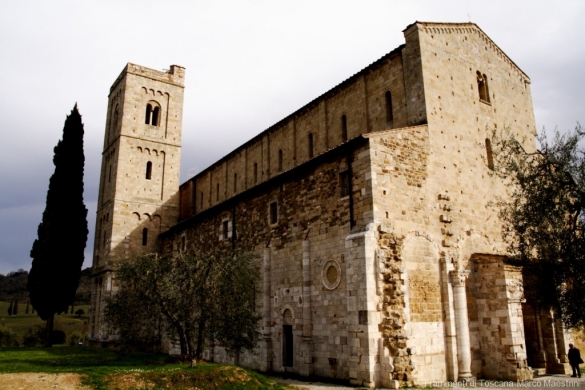 Thanks to imperial donations the abbey consolidated its prestige over a large territory from Western to Southern Tuscany, and in the XI century, due to its close vicinity to the Via Francigena, the pilgrims’ road to and from Rome, it was inserted into the system of European pilgrimage itineraries. In the early 12th century the present church was erected, in a Romanesque style deriving from the French Benedictine abbey of Cluny, whereas the bell tower is in Lombard style.

The heavy expenses incurred for the building of the new church led the monastery to a precarious economic situation, which represented the beginning of the decline of this Benedictine abbey, that was officially suppressed by Pope Pio II in 1462.  Its vast properties were annexed to the bishopric of Montalcino and Pienza, and in 1870 the abbey was inhabited by a tenant, who lived in Bishop’s apartment, used the Carolingian crypt as cellar, the Church and the cloister as shed for the animals!!! Luckily, the Abbey has been restored to its former glory and in 1992 a small community of monks came back and settled there.

The peaceful interior is simply splendid:  the layout with its three naves, walkaway and radial chapels is reminiscent of the French-style pilgrimage churches, as is the ascending slope of the central nave. The plays of light entering from the windows on the soft creamy walls and smooth and translucent columns in alabaster alternating with rougher ones in local travertine stone have a profound, mystic impact. 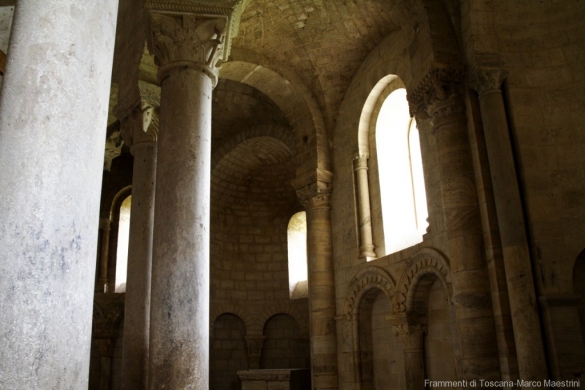 The monks chant prayers at scheduled times during the day: Gregorian chants are wonderful to hear, so try to plan your visit to enjoy this intense moment. The complete schedule can be consulted in the official website of the Abbey clicking here. As for other abbeys, we recommend to make your visit in low season or during the week, to experience the deep silence, calm and peace,  walk through and sit down on the grass, assist to a prayer and a chant  and  fully live this mystic experience that, in my opinion, goes beyond the practice of a specific religion, if any: you don’t need to be religious, to be spiritual. In Sant’Antimo this is even more evident. Enjoy it.

To reach the Abbey from Siena, drive towards Monteroni d’Arbia and follow the indications to Montalcino. Sant’Antimo is about 10km south of Montalcino. Follow the road from Montalcino to the Mount Amiata.  You will see Sant’Antimo on your right, down in the valley, just before the village Castelnuovo dell’Abate.