Getting there causes the sensation to travel back in time, in the mysterious Middle Ages, rich in legends that influence many people’s imagination, mine included.  And if you get there during the week, or also on Sunday in low season, when the silence dominates all, this sensation is even more evident.  This unique place is San Galgano Abbey that, along with the hermitage of Montesiepi, rises in the valley of the river Merse,  in the the Provinces of Siena to the border with the one of Grosseto, between the two medieval villages of Chiusdino and Monticiano. 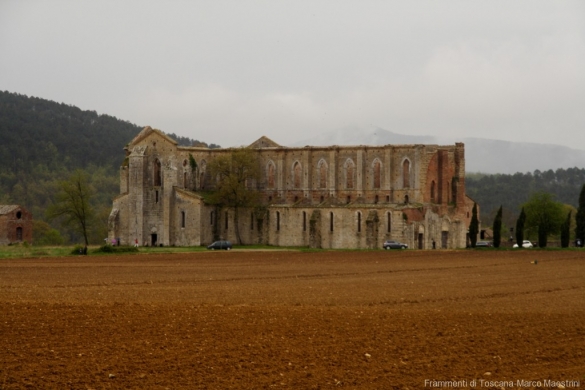 In this territory marked by an abundant presence of beautiful hamlets, castles, churches and monasteries, also this fascinating Abbey can be admired: the Cistercian monastery is picturesquely located in the rural fields, simple and essential in style, clear in colour and immediately recognizable for its most remarkable characteristic: it’s completely roofless.

The abbey was built in the 1200s, a period of strong affirmation of the Order of Cistercians in Italy, when the Romanesque style was merging with the newborn Gothic style, and in a short time acquired extended properties (land, mills, farms etc.). According to Cistercian customs, a monastery had to be sited in isolation away from towns or villages, as the monks wished  to follow a strict life of prayer and self-sufficiency with little contact with the outside world, on a plain sheltered by hills or mountains and by a river, in order to have all that was necessary for them to live and work within its walls. In fact, the place where the abbey was built, on a plain by the river Merse, must have appeared ideal to the monks at the time.

In the 1300s the decline started, due to the Black Death of 1348 that devastated Europe and decimated the monks in San Galgano. After this tremendous disaster, the definitive downfall was caused, as for many others abbeys, by the commenda (the imposition of an abbot from outside, in charge of the abbey’s s wealth and belongings): among the other misdeeds, one of the abbots even sold the lead from the roof, that then collapsed.

The lack of the roof, as well as that of the pavement, that in Spring is covered by grass, makes the Abbey even more evocative. The walls of the church are still fully intact and goes up towards the open sky: it’s a kind of magic to visit a church with the sky as  roof and a meadow as pavement! 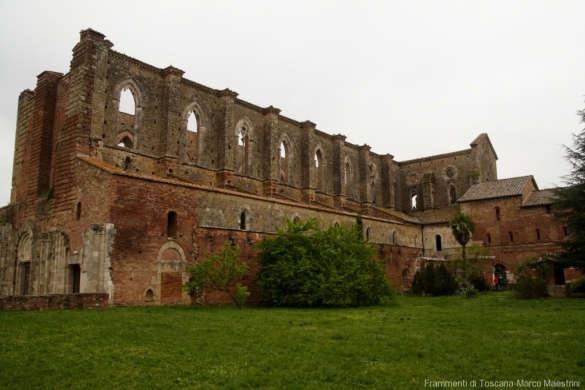 Near the Abbey the Hermitage of Montesiepi, sited on the top of a hill, offers a new fascinating story of the entire architectural complex: right at the centre of the church, a sword has been stuck in the stone. As in the legend of King Arthur, in this enchanting place a mysterious Sword in the Stone can be admired: there are resemblances between Galgano, a young nobleman dedicated to a life of luxury and vices who placed the sword in the stone when he decided to become an hermit and devote his life to God, and Galvano –  one of the knights of the round table –  so a contact point between the story of the Tuscan Saint and the Arthurian Saga can be detected. As for every myth and legend, mystery flutters on men secrets and fantasy runs out. There is, anyway, an absolute certainty: this place is magic and is definitely worth a visit. In silence, if possible. 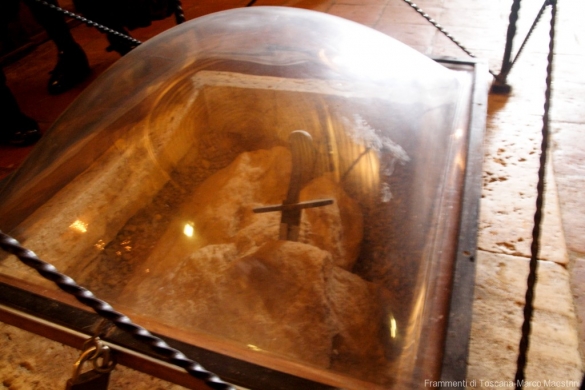 To reach San Galgano Abbey and the Hermitage of Montesiepi, take the highway Siena-Grosseto, leave the highway at San Lorenzo a Merse,  then follow the indications to Monticiano and the tourist signs to the abbey. For the details about the abbey and the hermitage, click here .